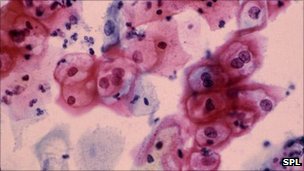 It was always a confusing decision in my eyes. Why choose the vaccine that only prevents cervical cancer when it is easy to also prevent Genital Warts. Now genital warts are not deadly or really very painful but they are uncomfortable and the cost the NHS £1000s in treatment, by laser, liquid of freezing. The original decision was claimed to be made for finical reasons but it has been shown that preventing warts in this way will save money in the long term. Now a moral objection has been claimed by some groups. With the idea that if you prevent people catching warts they will have more unprotected sex with multiple partners outside of committed relationships. I think that this argument has blinked and missed the sexual revolution from the pill and condom. Warts are not stopping people having sex, curing them will just save money and prevent peoples discomfort.
Google: "Switch in cervical cancer vaccine
BBC News

From September next year it will use the Gardasil jab, which also offers protection against genital warts - one of the most common sexually transmitted infections. Some sexual health experts criticised the decision in 2008 when the Department of Health opted for the cheaper of the two vaccines ..."