January 13, 2010
I have based this exercise on the Intimacy Pyramid from the Oasis Esteem Programme. I have used lots of the same words but have added some extra words and changed some wording.

Simply the exercise works by getting the class into groups of around 3 or 4 and giving out the cards (holding back the cards that say sex).
- Ask the groups to pick the top 10 cards that they would want in a good friendship.
- Ask them to put the card into a pyramid with the most important card at the top.
- Go around the group and ask them to feedback the top 3 cards in the pyramid.
- After everyone has feedback, point out how similar people's top 3 cards are. Encourage the group that although we are all different we are all looking for similar things in friendships.
- Now get tell the group to make the pyramid into a romantic relationship by adding 3 cards and remove any cards they think should not be in a relationship pyramid.
- Ask groups to feedback the 3 cards they have added and explain the positioing of at least 1 of the new cards.
- Then give out some sex cards (the 5 cards on the bottom of the page). Some people will choose not to include the 4 cards describing 4 distinct sexual activities some may just use the simplified card saying "Having Sex". Make your decision based on the group you are working with.
- Ask the groups to decide if they think these cards should be included in a relationship pyramid. Let them spend a lot of time discussing the question. You can also encourage them to think about if they believe as they got older sex may get more important.
- Encourage groups to feedback what they have decided, (I don't recommend you force every group to feedback, as some individuals may be uncomfortable). It may also be appropriate to encourage the class to discus the different groups decisions.

Finish the exercise by reminding everyone that their are no right and wrong answers, we just want to encourage people to think about what their priorities are in relationships. I suggest its worth saying that sex is best kept for a relationship built like a pyramid and that this happens best in a long term/marriage what ever your pyramid look likes.

Below I have posted a jpg version of these relationship pyramid cards and a word document version below if you would like to change, remove or add your own cards. 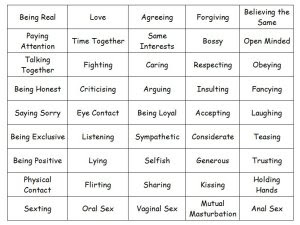 February 04, 2013
Today I shared another resource listing the agree disagree statement I often use in Relationship lessons. I find agree disagree activities as a bit of a two edge sword. Sometimes they are great and sometimes they just seem flat.  I think agree/disagree activities work well if young people in the group do not all think the same. The true value in agree/disagree activities is the discussion it can stir up. The discussion is the point where young people learn things and develop their attitudes. The statements need to be crafted to try and divide opinion and stir up this discussion. When the statements do not divide group opinion then rarely will I get a good follow up discussion. The problem is that the statements that work well for one group do not work for another group.  The temptation is to try and pick truly controversial issues but I have had as much success with the historically controversial issues (abortion, porn etc) as the more standard issues (loyalty, respect, condo
Post a comment
Read more